The story of the Apparitions of the Blessed Virgin Mary in O Corpiño is described in an existing document in the parish archives of Santa Eulalia de Losón, the parish where the Sanctuary is located:

“In the middle of the 8th century, a hermit lived on the slopes of Mount Carrio, east of the desert of Carboeiro. He preached and encouraged the cult of the Virgin Mary throughout the region. His life of austerity and penance was the object of curiosity and religious respect from the neighborhood. His dwelling was constantly visited by the townsfolk. They wanted to see the “saint”, hear him and drink from his lips the truth, the words of miraculous virtue that infuse strength against the evil spirits.

When the hermit died, the neighbors found his body incorrupt in his grotto. In order to perpetuate his memory, they decided to build a chapel dedicated to Saint Adrian, in the same place where he had lived and his body was. Since then his tomb is know as “O Corpiño” (The Little Body). Sooner the name extended from the town to all that region.

At that time, the invasion of the Saracens took place and with the disorders of the continuous battle the chapel was ruined. One day in the month of June, in the middle of the 12th century, large clouds in the form of fire castles surrounded the horizon and hid the sunlight sooner to the neighbors of those contours. Some shepherds of San Pedro de Losón were overwhelmed by the fear of thunder and lightning. They sought refuge in the ruined chapel of O Corpiño, a place they often chose for their games. When they entered it, they suddenly found themselves bathed in a mysterious light. In the midst of those glows, they saw an image of the Virgin. She was with Jesus Child in her left arm and a bouquet of flowers in her right hand. They huddled in a corner and saw how the Beautiful Lady approaches them smiling, wrapped in radiant light and full of heavenly beauty. And She told them to make the Sign of the Cross. They crossed themselves and the tempest calmed down. They spent all the evening and late into the night in the ruins, as they were absorbed in the contemplation of that smiling image. She attracted them with the sweetness of her eyes and made them feel an indescribable well-being feeling. But their parents saw the cattle return without shepherds and fearing that something bad had happened to the kids, they went out their homes, searching the children. The parents found them very happy at the foot of the ruined walls. They rebuked the children sourly, but the kids did not defend themselves. They had the tacit intention to return to the same place the next day at dawn. The children couldn’t hide the joy they possess on their way back home.

The next day the children returned to the same place stopping much more time than the previous day, and they abandone the cattle again. When their parents saw that the yesterday warnings did not produce their effect, they punished the shepherds severely without listening to them. As they believed this apologies to be unfounded and only pretexts of the children to hide their mischief.

The next day, ignoring the warnings of their families, the children went to the same point to worship the sovereign Queen. The parents couldn’t understand so much stubbornness because those innocents had been submissive to them until then. This time they decided to pay attention to their stories. Among others, there was two girls who said: “In the same mountain we have seen that Lady and She spoke to us with great affection, telling us to make the Sign of the Cross” and they also told them about the wonders and prodigies that they had seen in the mountain. 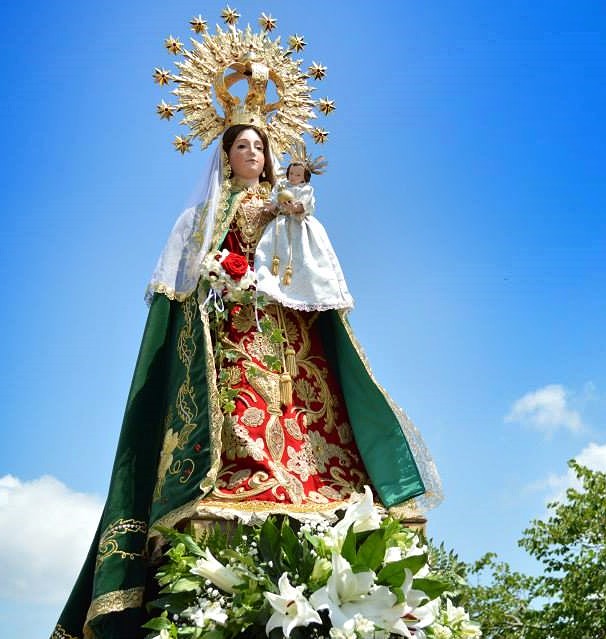 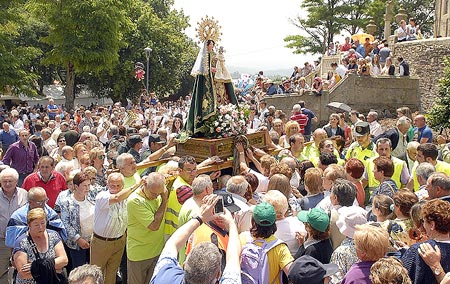 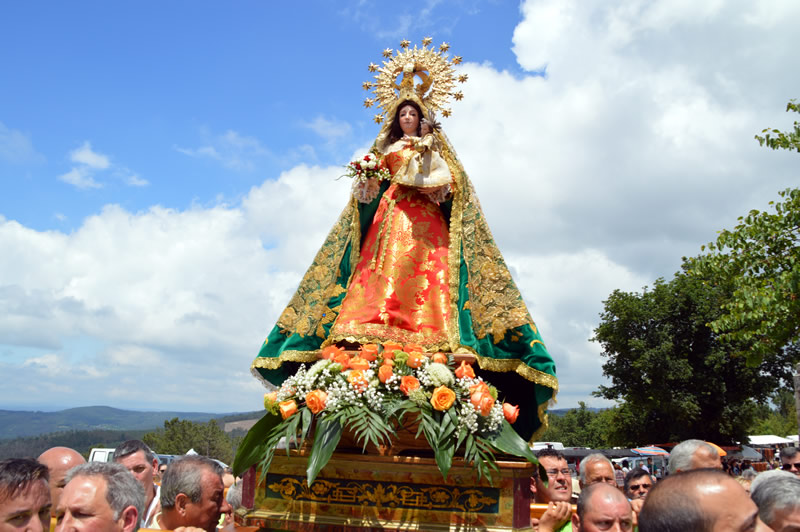 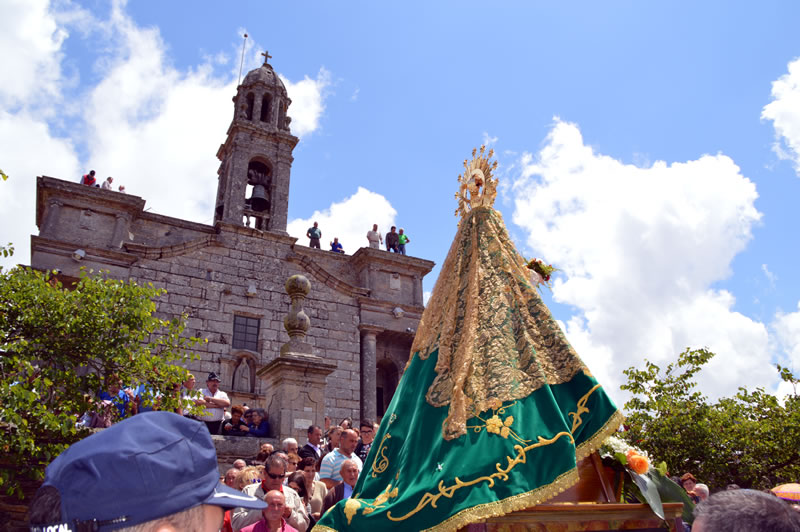 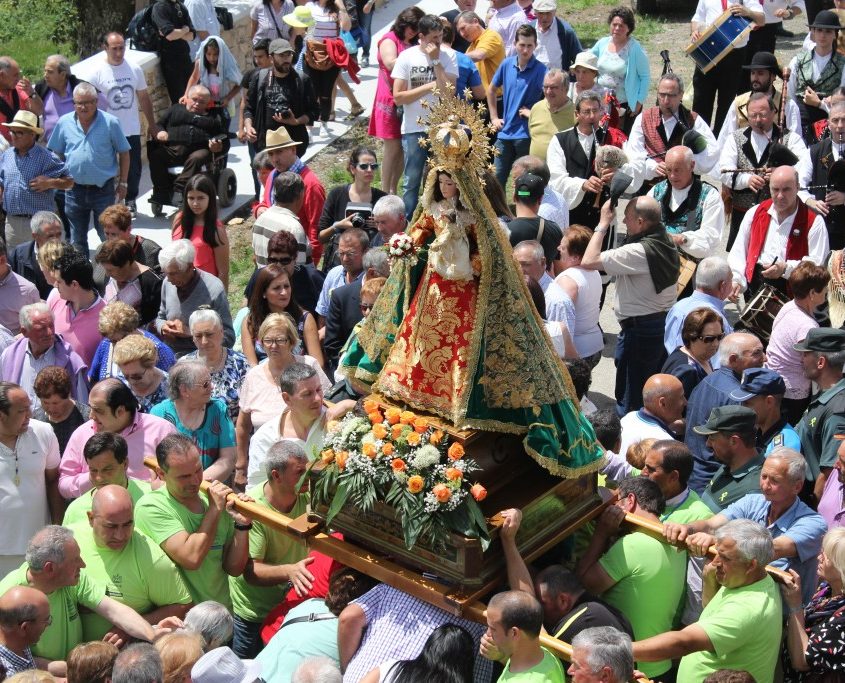 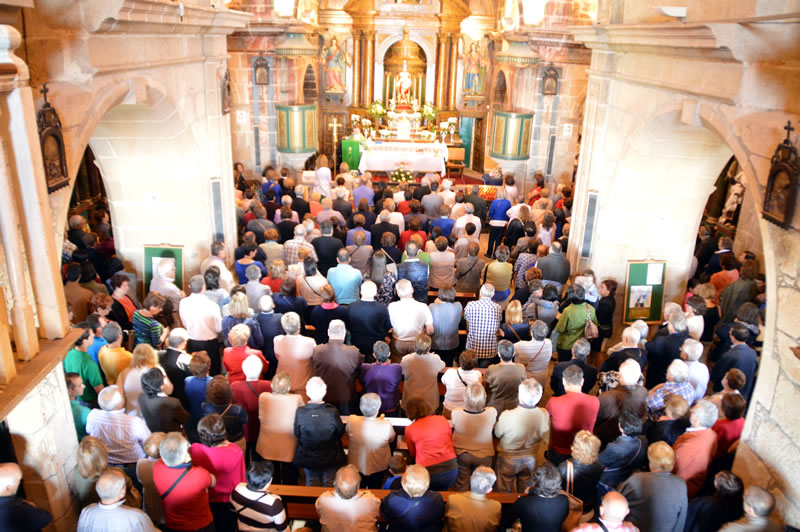 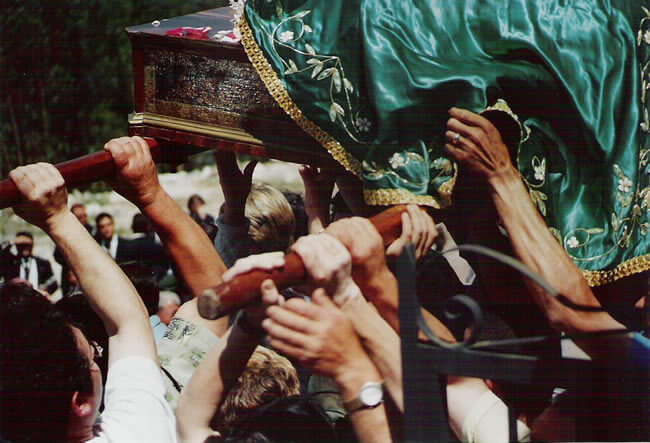 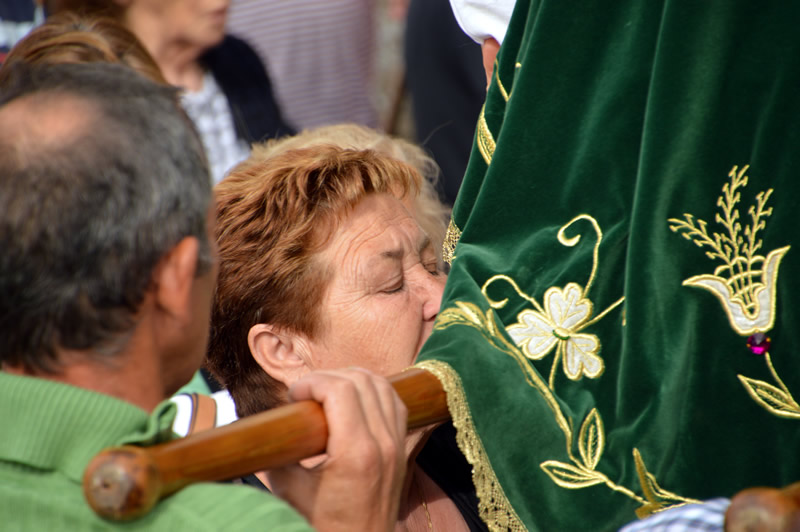 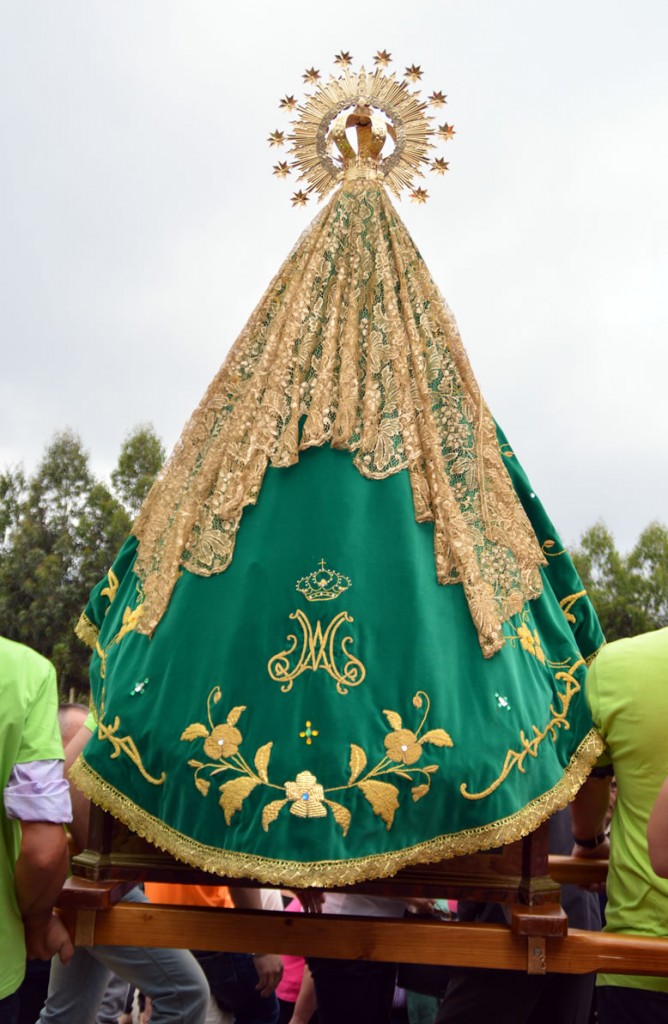 Once again the parents didn’t believe their story and thinking to be all subterfuges and lies, they cruelly whipped the children. That did not prevent the shepherds to return to the ruins the next day. When they get back home, they told the wonders and prodigies that took place in that place once again.

This time the parents decided to follow them and observe from a distance. So they chose a spot where they could clearly see the walls or ruins of O Corpiño. Once there, they were amazed and astonished at the bright shimmering lights that shone like a new sun on those mountains. Possessed of fear and respect, they did not know what to do. Neither dared to get closer to know where that phenomenon and mystery came from. Finally, they decided to return to their homes. Some thought that they should divulge what they had seen. On the other hand some people thought that they should repeat the observations to be sure before exposing themselves to the jeers of their neighbors. And this opinion prevailed.

Repeated the observations in the following nights, their admiration increased more and more. That wonderful light and surprising clarity that surrounded the chapel of the Holy Hermit instilled veneration in their hearts.

This time they did not hesitate to told the apparition to all neighbors, asking their opinion about what should be done. But the people did not believe them and assumed that they were certainly deceived or had suffered some hallucination. So they resolve to go with them by day to the place of the event and record everything. They did it without any result. Enmity arose between them at this moment. But it didn’t last because the constant appearance of the glows in the place. Finally, the neighbors could no longer doubted that all this was the work of God. And they finally believe that the Lady whom only the little shepherds could see was the Mother of the Savior. And that She deigned to visit Mount O Corpiño for the love of men and for the infinite mercy of her Son.

They put everything in the knowledge of the parish priest. He also did not have the disposition to believe in that apparition and therefore he gathered the most faithful parishioners, including a devout old woman. She, after receiving the Sacred Eucharist went to the hermitage and while she was praying, the Virgin appeared to her. She appeared the same way as to the cowherd boys, with the Child in his left arm and the bouquet of flowers in his right hand. Full of joy and giving thanks to God for such marked favor, she informed the parish priest and the neighbors. On this occasion the priest in person, and accompanied by a large crowd, went to the place of the hermitage in solemn prayer from the parish church of San Pedro de Losón. It was June 24 and there was the last appearance of Our Lady. This time in the presence of all the people who, prostrate on the ground, burst into tears of gratitude and love to the Empress of Heaven. Then she disappeared mingling with the atmosphere, in the way that a cloud is generated in the air or dissolves in summer time.

The parish priest ordered to build a chapel there where all the neighbors worked had, personally or lending their interests. In the chapel, also, they have to put an image of the Apparition.

The anniversary of the apparition was celebrated with a Thanksgiving Solemn Mass, with the placement of the Image that they led processionally and with the inauguration of the Shrine. A brotherhood began, whose brothers soon became so many that they needed two days for confessing and communing.”